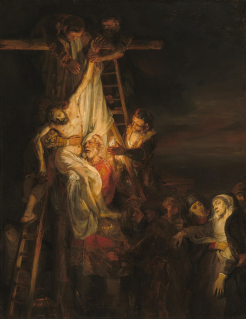 Good Friday comes around once a year. And although followers of Jesus should frequently reflect upon the death of our Lord and what was accomplished, this one day out of the year we corporately come together and abide in a more serious reflection on what occurred at Calvary.

I think that it can be easy during this celebration of Holy Week to move quickly from the Death to the Resurrection, but the problem with that is if you don’t soak in the terrible and wonderful realities of the death of Christ, you won’t benefit as much as you could in taking in the glory of the resurrection. So what are these realities? Many, but one that I find extraordinary is that the death of Christ is the greatest paradox that the world has ever seen. There, arguably, the greatest act of sin occurred, but simultaneously the greatest act of love occurred.

The Greatest Act of Sin: Human beings mocked, scorned, spit on, hit, and crucified Jesus. They took thorns, formed a crown, and put it on his head (imagine thorns going into your skull) and hit him on the head over and over again with a reed, mocking him and jokingly bowed down to him, as they put a purple robe on him. Human beings also took whips with shards in them and tore his body open by lashing him again and again. I’m being brief here but there’s so much more that happened with Pilate, the Pharisees, etc. Read those last few chapters of the gospels and see for yourself. The walk up to Calvary alone should bring us to utter shame and horror at what the sinful nature that lives in you and me has done. But it doesn’t stop there – they took nails and hammered them into his hands/wrists, and many continued to mock as he hung there for hours. Humans were so blind that they put the Son of God on a cross and thought that they were doing the right thing…

The Greatest Act of Love: But then, the other side of the paradox; the act of love from Jesus on that cross… perhaps the most moving words that I have ever heard came out of Jesus’ mouth that day on the cross: “Father, forgive them, for they know not what they do.” Can you imagine… someone mocks you for hours, spits on you, punches you, tortures you, and you are the King of the Universe, Creator of all the people around you, and the tree that you’ve been carrying and then are nailed to, shamed and scorned when rightly you should be bowed to, and you could turn all these people into a pile of ash in seconds by calling a legion of angels to pour out their wrath… but instead you chose to plead for the people’s forgiveness. There is life giving power in this scene. The death of Jesus was the most profound paradox in human history. Don’t rush so quickly to the resurrection. Take time to soak in as John Owen calls it “The Death of Death in the Death of Christ” Don’t rush to the resurrection just yet, take in the cross and the tomb, take in the greatest act of sin and love that the world has ever seen.

My forest is progressing! 🌿🌲🍂🐿🦦
The sea never ceases to inspire. Another world quietly sits in the deep, desiring to be discovered. Calm and peaceful, yet terrifying and treacherous.
Merry Christmas & Happy New Year from the Andrassy’s 🎄
For those wanting to write... a tip I want to share that’s helped me is your aesthetic set up. Make the area you create fit the mood of what you’re working on. I’ve found this very helpful over the past few years. #write #create #inspire #dream What is it you’ve dreamed of creating? Does aesthetic set up help you to create it?
The ancient path of Mooreville forest lay before them... #sketching #illustrations #pinetrees